Are you searching for comprehensive information on Chennai Metro routes? Want to know the latest Chennai Metro timings or get a complete list of metro stations in Chennai? Or, are you looking to download Chennai Metro map? This post covers everything you should know about Chennai Metro trains and the network.

Chennai Metro, the third-longest metro network in the country, serves Chennai, the capital city of Tamil Nadu. It is owned and operated by CMRL (Chennai Metro Rail Limited), a joint undertaking of the central government and the Tamil Nadu state government.

The network currently has two lines – the Blue Line and the Green Line – and covers a length of around 54.15 km. These two lines have a total of 40 stations. The Chennai Metro Phase 2, which consists of 3 lines, is in the planning and tendering stage.

This post gives you a comprehensive overview of the metro network in Chennai, including a list of stations and details about the fare, timings, maps, routes, parking charges, and other travel-related information. We have also compiled some of the frequently asked questions about the starting and closing timings, travel card recharge, and more. 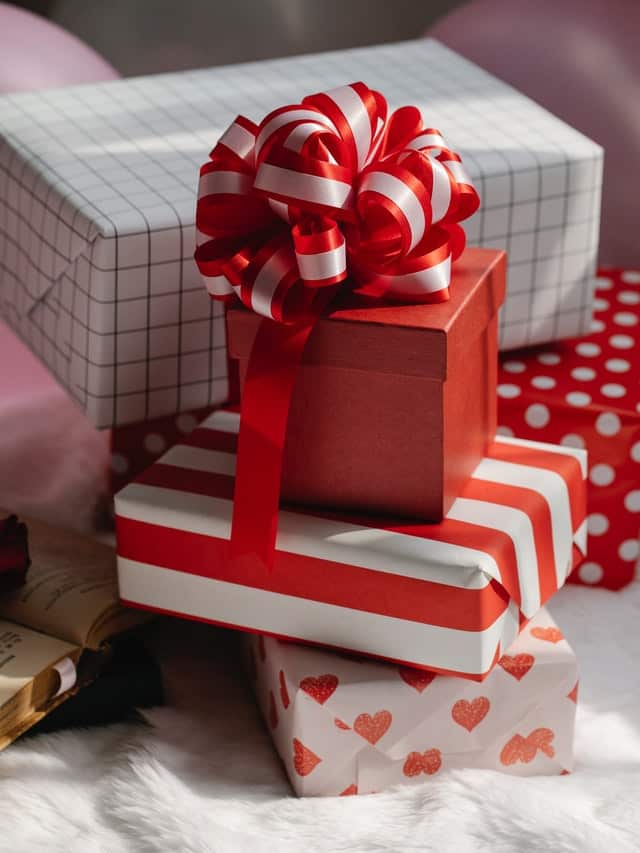 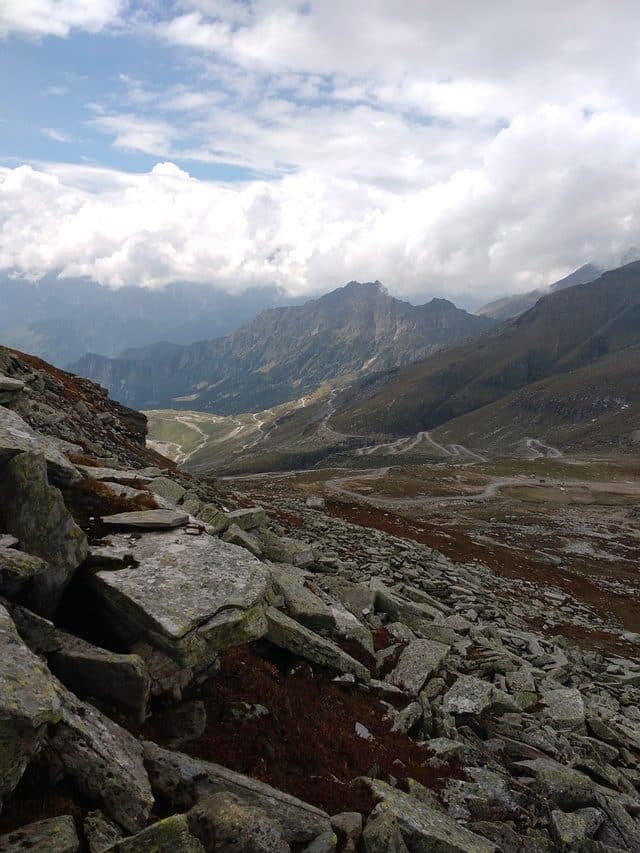 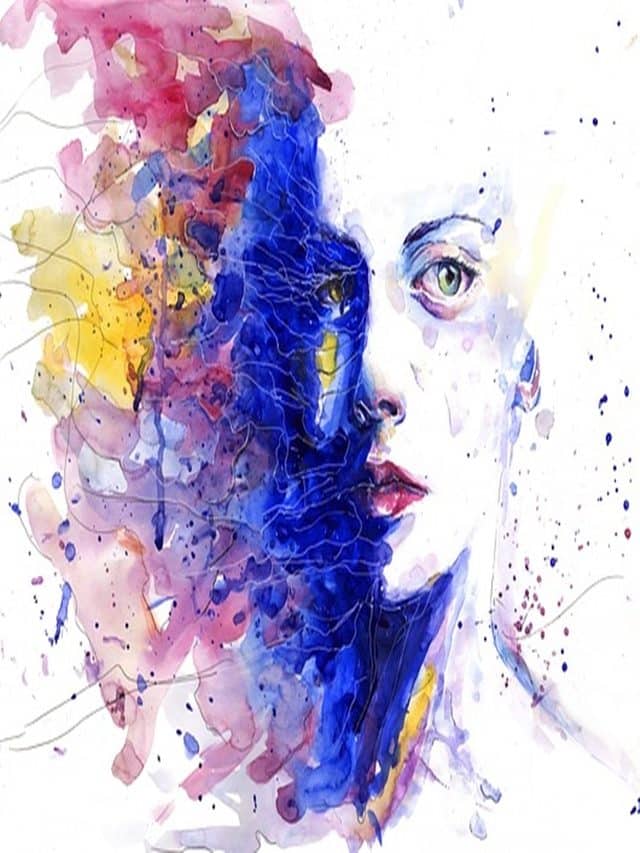 As of 2021, the metro rail network of Chennai has two operative routes, covering a total distance of 54.15 km.

Given below is the latest Chennai Metro Map with the routes and stations:

The Blue Line (Line 1), one of the two Chennai Metro routes, connects Wimco Nagar and Chennai International Airport. The total distance covered by the Blue Line is 32.15.

There are 25 operational metro stations on this Chennai Metro route. Some of the major stations on the Blue Line are MGR Central, High Court, Thousand Lights, Saidapet, Guindy, Meenambakkam, Andalur, and Chennai Airport, to name a few.

Given below is a complete list detailing the Blue Line metro route in Chennai:

Given below is the complete route map of the Green Line route:

Here is a complete list of metro stations in Chennai on the Blue Line:

The names and locations of all stations on the Green Line are listed below:

Please note that Chennai Metro train timings might be affected by the pandemic or maintenance/construction activities. For updates regarding changes in the timings, check the CMRL website.

The table given below has shows the frequency of metro trains in Chennai on the Green Line, Blue Line, and the Inter-Corridor (Chennai Central Metro Station to Chennai Airport Metro Station).

The table given below shows the timings of the first and last trains from all terminal stations on the Green and Blue lines.

You can download the latest and revised Chennai Metro fare chart here.

To calculate the fare online between any two metro stations in Chennai, follow the instructions given below:

Chennai Metro Phase 2 or CMRL Phase 2 involves the construction of 3 new lines and 128 stations. The project covers a distance of 118.9 km.

The new lines proposed under Phase 2 are as follows:

Given below are the details of Chennai Metro Phase 2, including the route, distance, and the names of stations in each line.

Check out the Chennai Metro Phase 2 Map with the proposed routes, stations, and intersections.

Given below are details of Chennai Metro parking charges and facilities:

* The parking charges for Chennai Airport Metro Station and a few other stations are different. To get station-wise parking charges, check out the latest parking tariff here.

Is there metro connectivity to Chennai Airport?

Yes. The Blue Line of the metro network has a metro station that serves the international airport in Chennai. Those traveling by the Green Line can change to the Blue Line at Alandur or MGR Central (Chennai Central) and reach the Chennai Airport Metro Station.

How do I get to Chennai Airport from Chennai Central by Metro?

What is the starting time of Chennai Metro?

The starting time of the metro network in Chennai is 5:30 am on weekdays (Monday to Saturday). On Sundays and public holidays, it is 7:00 am.

What is the closing time of Chennai Metro?

The closing time of Chennai’s metro train network is 11:00 pm on weekdays (Monday to Saturday) and 10:00 pm on Sundays and public holidays.

Is there metro connectivity to Egmore?

Is there metro connectivity to Tambaram?

How many metro stations are there in Chennai?

Currently, there are 40 metro stations in Chennai – 25 stations on the Blue Line and 17 stations on the Green Line. The network has two interchange stations (Chennai Central and Alandur) that serve both Green and Blue lines.

Is there a Chennai Metro app?

Yes. The Chennai Metro Rail app is the official app of CMRL. If you are an Android user, click here to download the app. The iOS version of the app is available here. You can use the app to:
1.      Get station info
2.      Get live train timings
3.      Know parking facility and availability
4.      Check the distance, route, and fare between any two stations
5.      Find the nearest metro railway station
6.      Recharge your travel card
7.      Buy contactless QR tickets or trip passes
8.      Get information related to travel and the metro network
9.      Contact CMRL helpline

Which is the nearest metro station to Chennai Airport?

Chennai Airport Metro Station is the nearest metro stop to the international airport in Chennai. The station is connected to the terminals through walkalators and shuttle services

Which is the nearest metro station to Chennai Central?

Is metro available in Adyar?

Currently, the metro network in Chennai doesn’t have a station in Adyar. The nearest metro stations to Adyar are Nandanam, Guindy, and Little Mount. All these stations are on the Blue Line and within a distance of 7 km of Adyar.

How can I buy a Chennai Metro travel card?

You can buy a Chennai Metro Travel Card (smart card) by visiting the ticket counters or Ticket Office Machines (TOMs) at any of the metro stations in Chennai. The cost of the Travel Card is INR 100 (refundable deposit of INR 50 + top-up of INR 50).
You can recharge your Travel Card online or offline. The minimum and maximum recharge amounts are INR 50 and INR 3000, respectively.

How do I recharge my Chennai Metro card?

You can recharge your Chennai Metro Travel Card (store value card or smart card) both offline and online.
1.      Using Ticket Vending Machines (TVMs) installed at the stations.
2.      Using Ticket Office Machines (TOMs).
3.      Through the CMRL mobile app. Check the next question to see how to recharge your CMRL Travel Card online using the mobile app.

How can I recharge my Chennai Metro Travel Card online? 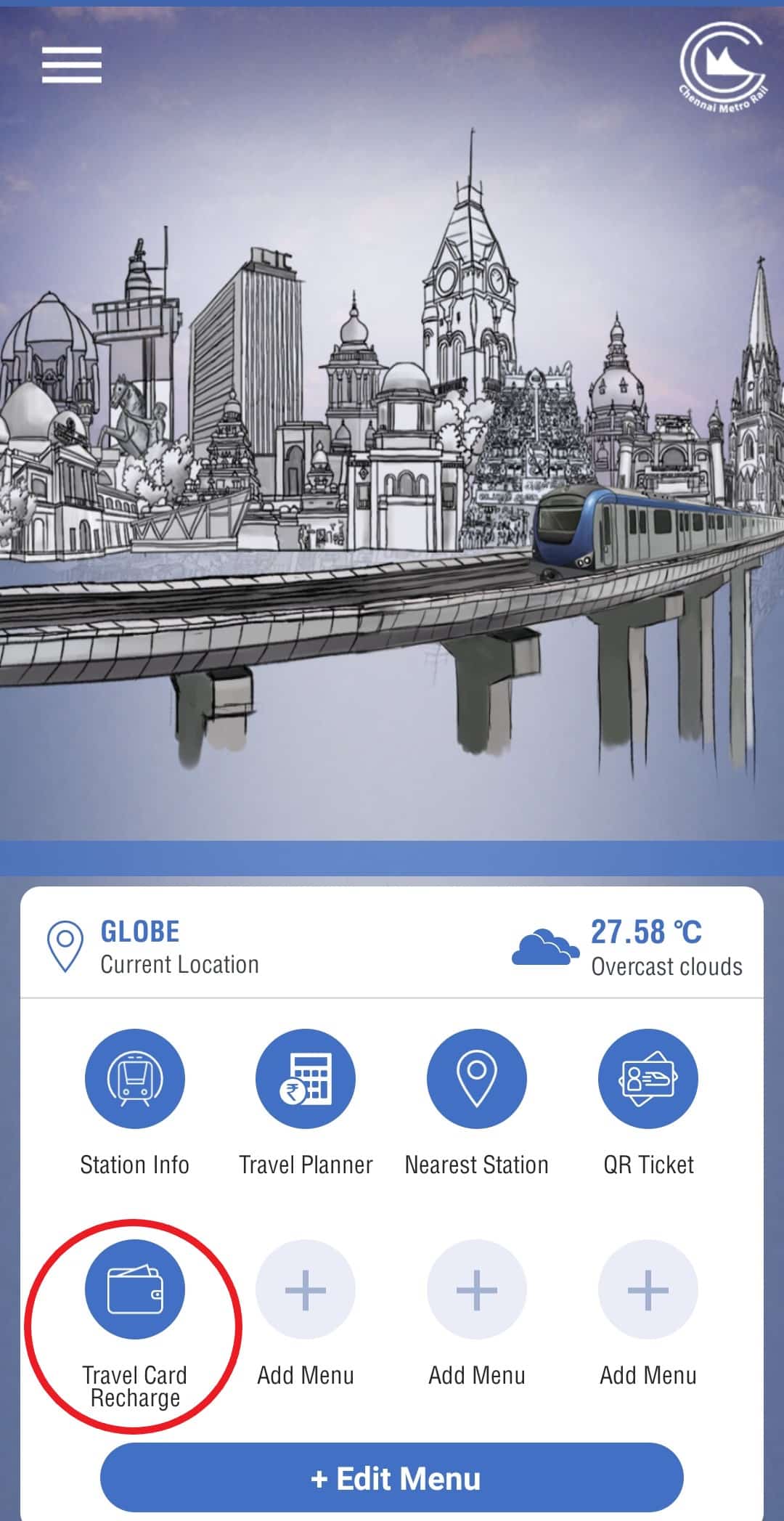 Step 3: Log in using your credentials / New users must register on the app by clicking the Create Account option. 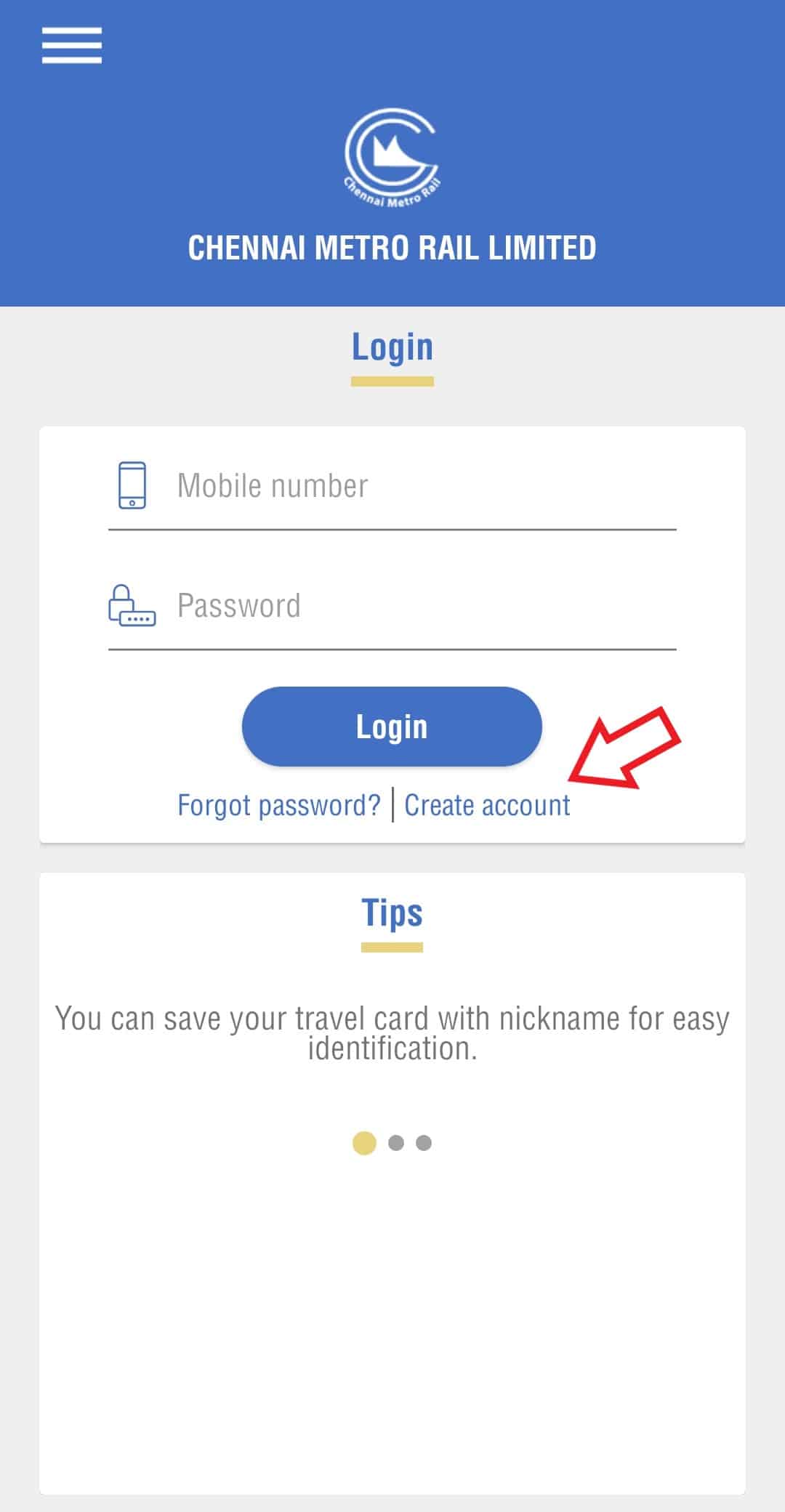 Step 4: Click on Add New Card to add your card details. Alternatively, you can recharge the card using the Quick Recharge method. 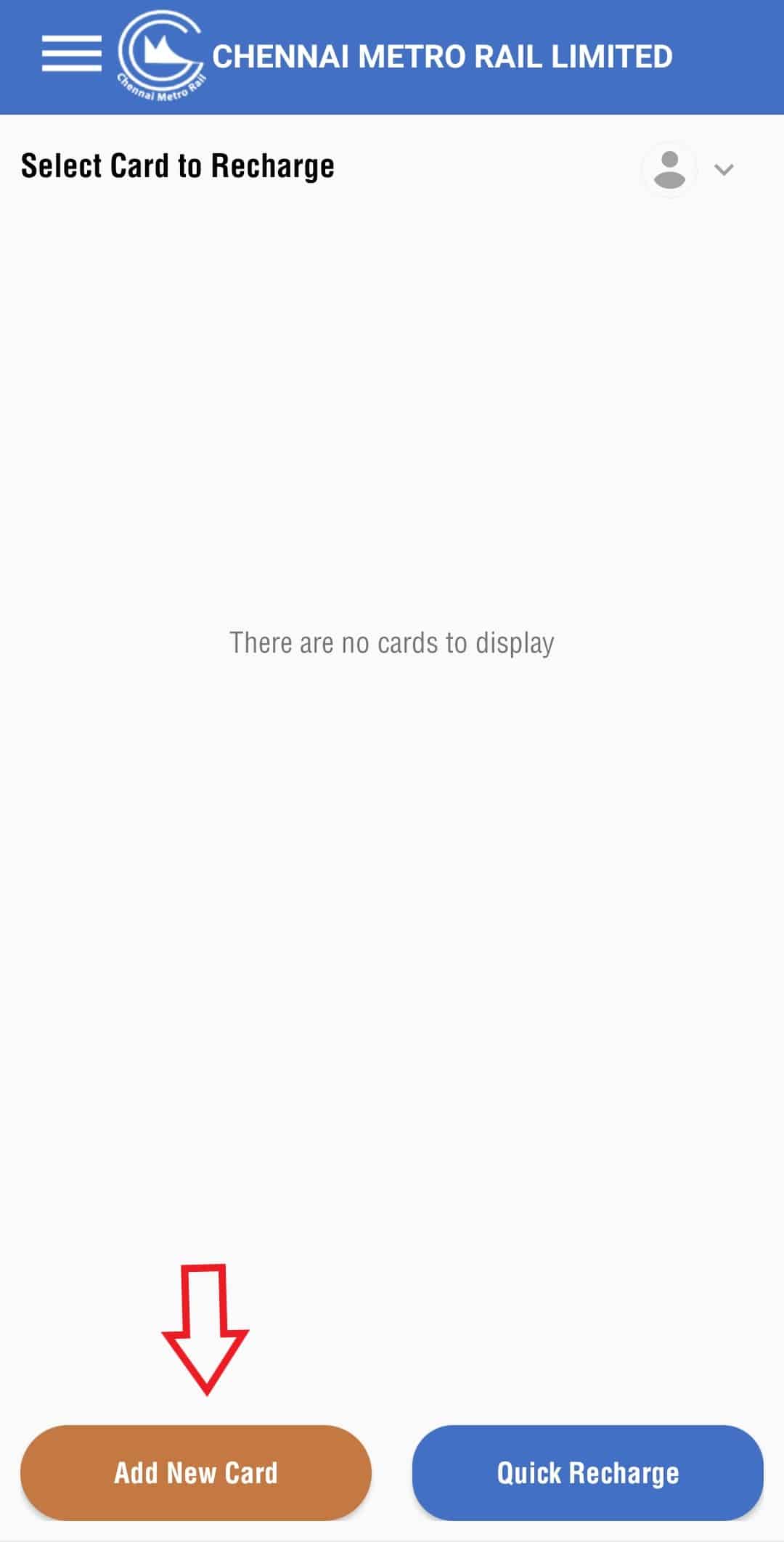 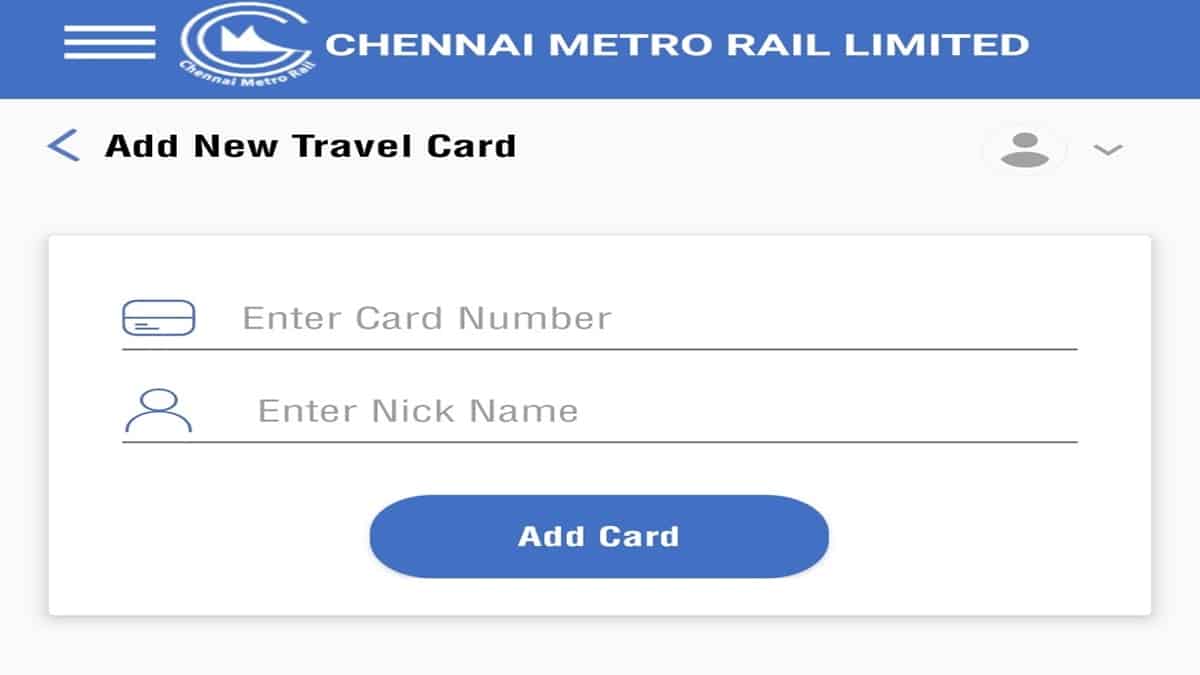 Step 6: Your name and card number will be shown on the screen > To recharge the card, click on it. 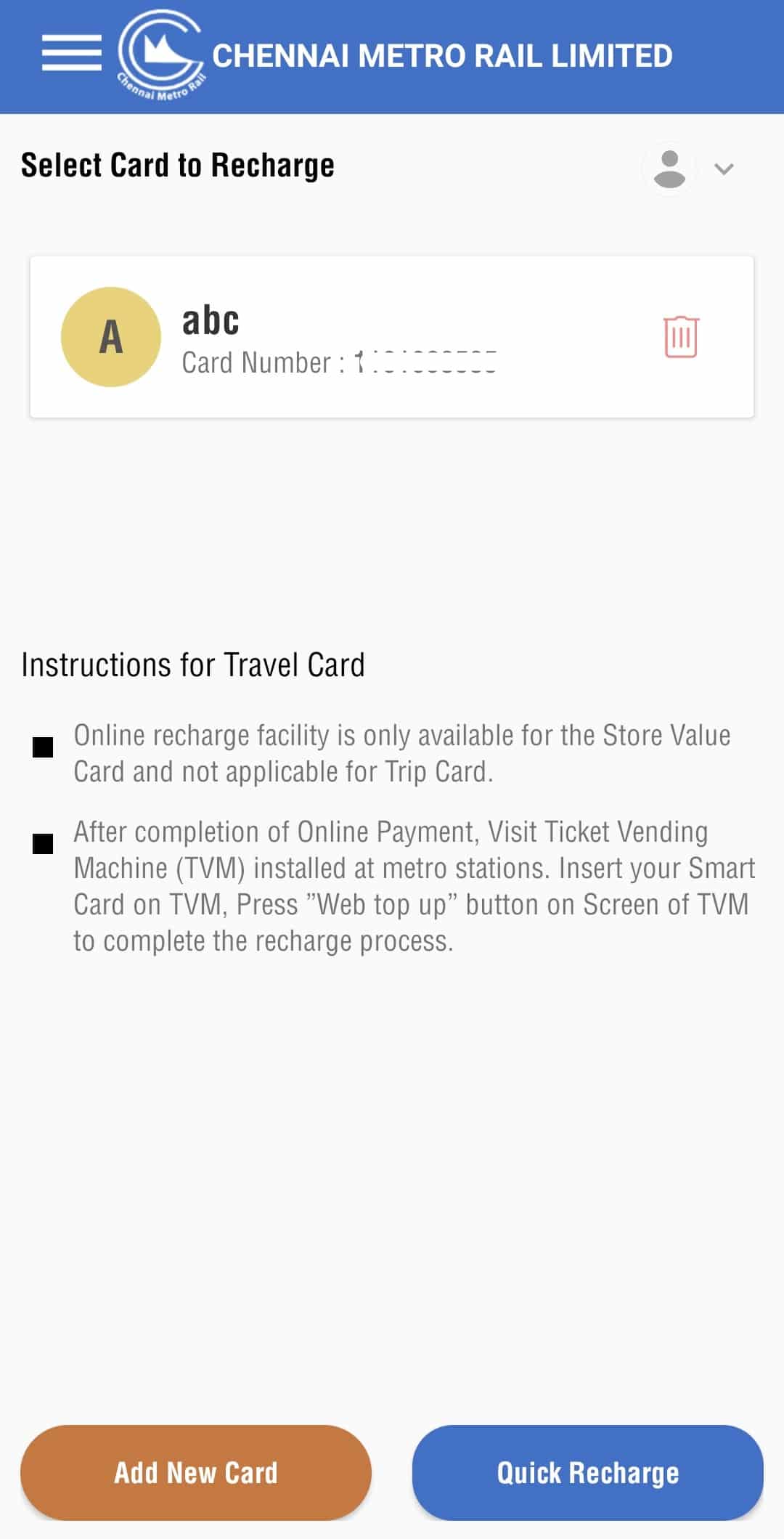 Step 7: Your name, card number, card balance, etc. will be shown on the screen > Enter the amount you want to add to the card > Click on Add Money. 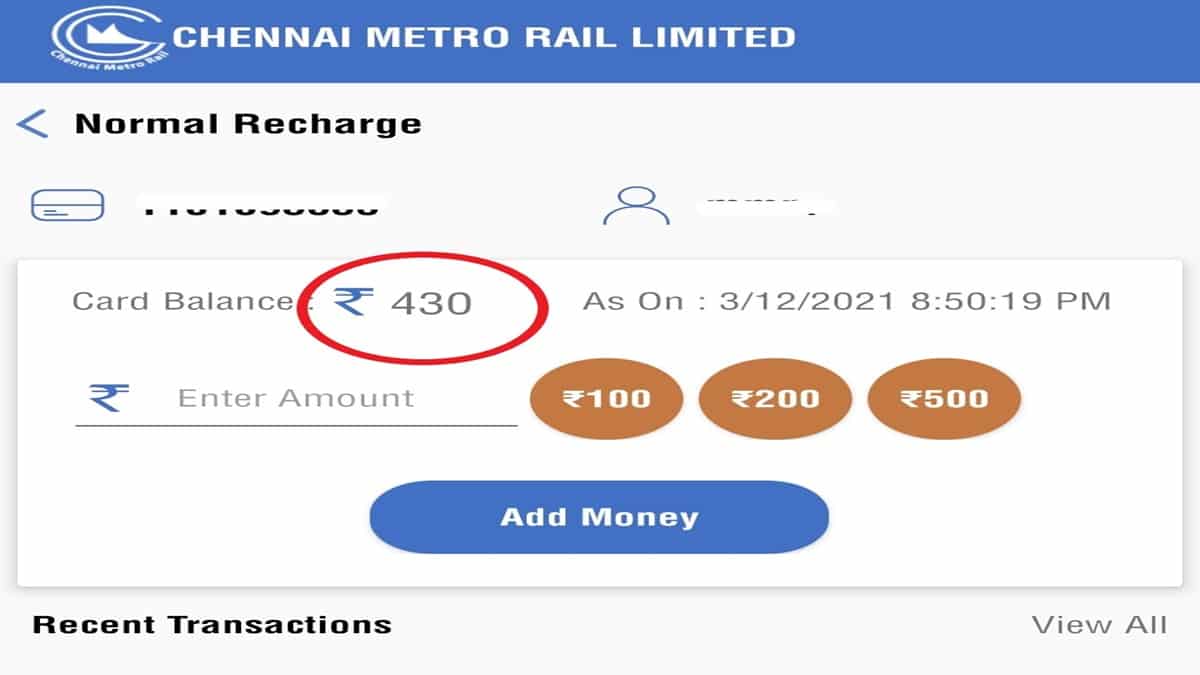 How can I check my Chennai Metro card balance online?

You can check your Chennai Metro card balance online through the CMRL mobile app. Here’s how to do it:
Step 1: Download the Android version or iOS version of the Chennai Metro Rail app > Open the app > You can see the home screen > Edit Menu > Add Travel Card Recharge > The icon will now be added to your home screen.

Step 5: The card is now added to the screen > Click on it.

Step 6: You can now see your card details on the page, including your Chennai Metro card balance.

Alternatively, you can check your Chennai Metro card balance by swiping/inserting your card in the Ticket Vending Machines (TVMs) or Card Reader Machines installed at the metro stations. Your card balance will be shown on the screen.

Chennai Metro’s QR code ticket is a contactless ticketing method that allows you to buy tickets through the mobile app. When you purchase the ticket, you will receive a QR code on the app, which you can scan at the QR code scanners installed at the entry/exit gates.
Here’s a step-by-step guide on how to buy Chennai Metro’s QR tickets online through the mobile app:
Step 1: Download the Chennai Metro Rail app. (Android version or iOS version).
Step 2: Open the app > Click on QR Ticket. 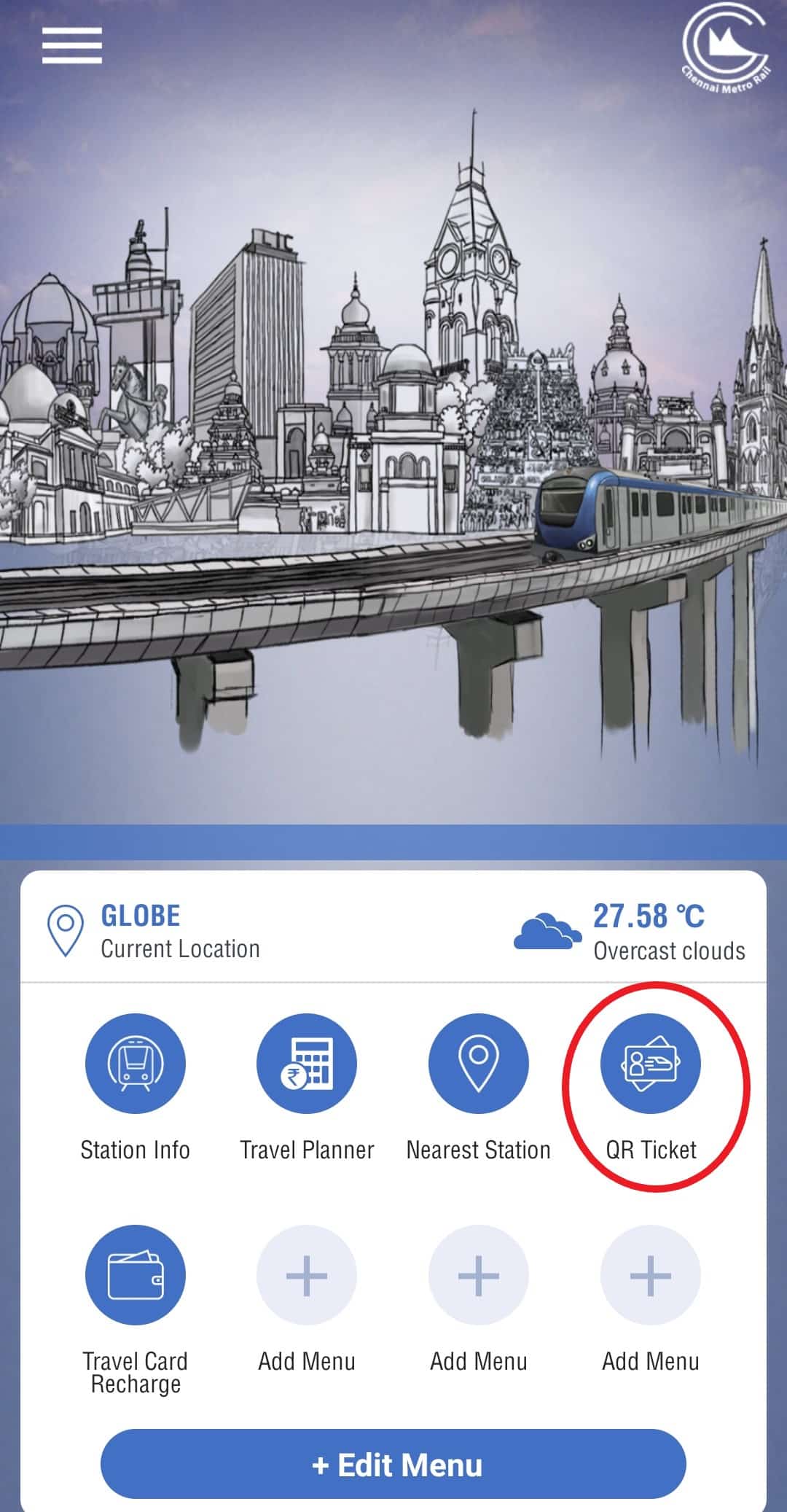 Step 3: You will be asked to log in or register on the app. If you are a new user, register by filling in the required details and then log in using the credentials.
Step 4: Choose your journey details – single journey or round journey, source station, destination station, number of tickets (max. 6), etc. > Based on the details you enter, the total fare will be shown on the screen > Click on Pay Now > Confirm the ticket details > Continue to Payment. 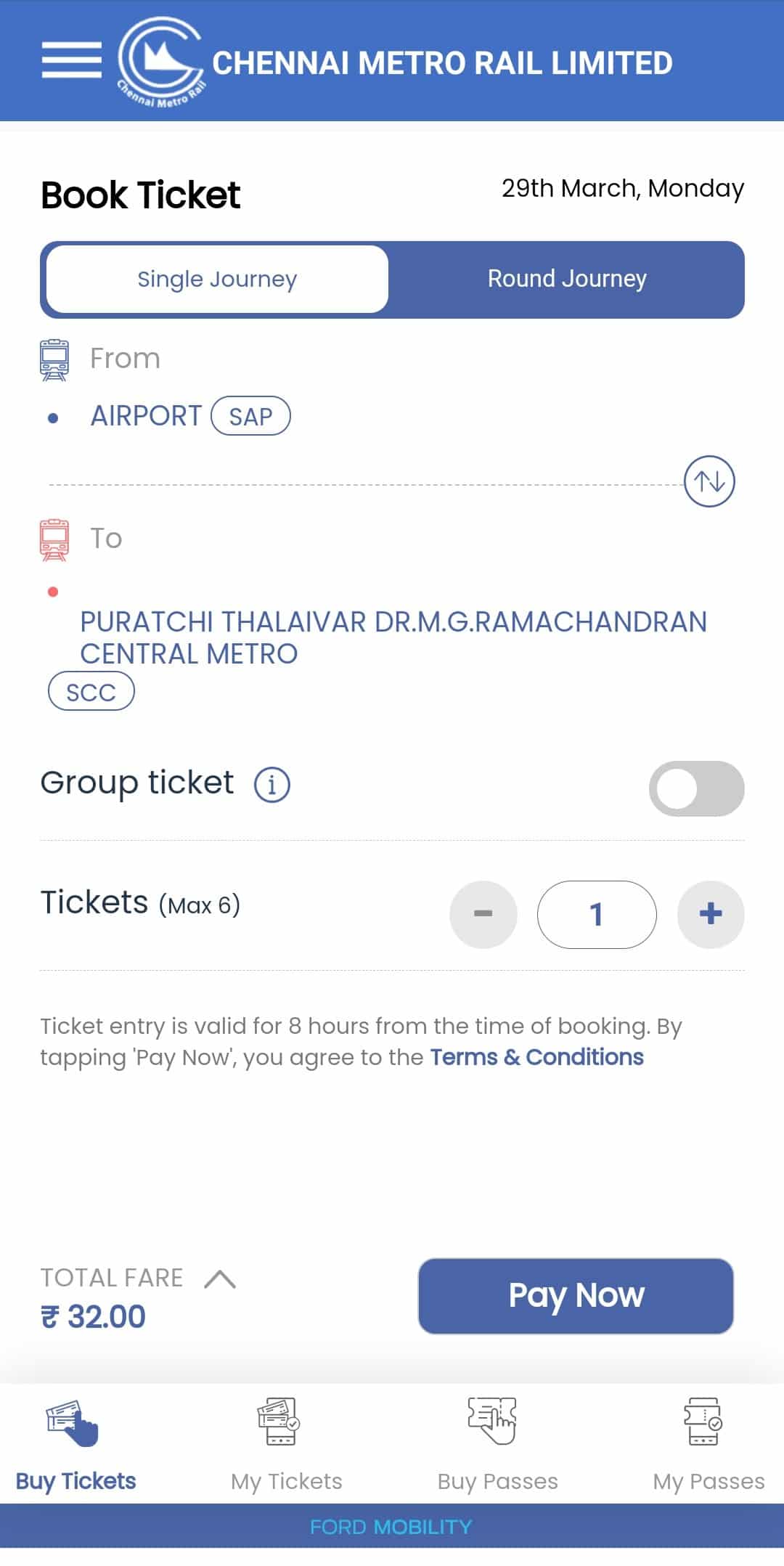 Step 5: Choose a payment method (credit card, cash cards, debit card, net banking, etc.) > Complete the transaction.
Step 6: You will get a QR code (valid for 8 hours from the time of booking).
Step 7: Swipe it at the QR code scanners installed at the entry/exit gates.

How can I buy a Chennai Metro Trip Pass online?

Chennai Metro Trip Passes allow multiple rides between two fixed stations. Unlike the Travel Card, the Trip Pass cannot be used for traveling between any two stations, but only for a fixed route.
You can purchase the Trip Pass online through the CMRL mobile app and enjoy multiple rides using the QR code you receive. Here’s how to do it:
Step 1: Firstly, download the Chennai Metro app on your phone. It is available for both Android and iPhone users.
Step 2: Open the app > Select QR Ticket.

Step 7: Verify the Trip Pass summary > Pay.
Step 8: Choose a payment method and complete the transaction.
Step 9: Upon successful purchase, you will get your Trip Pass QR code. You can start traveling by scanning the code at the entry/exit gates.

What is the full form of CRML? 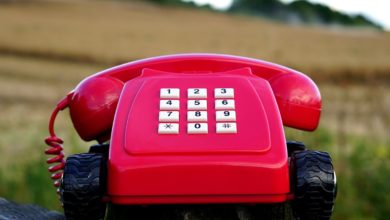 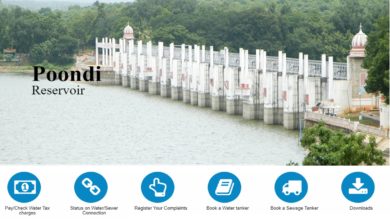 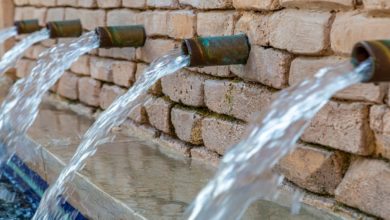